Bike Trains are the Lightest Rail 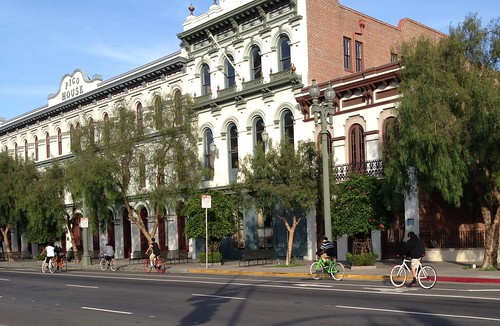 Jump on the train! The bike train that is… A group of enthusiastic bicyclists have organized LA Bike Trains: routes across Los Angeles, encouraging Angelenos to ditch their cars and join a bike train to work.

What is a bike train? It’s a slow and steady bike ride to work taking a regular route in the company of other bicyclists. Bike trains are led by reliable Conductors that monitor the speed and safety of the ride, ensuring all commuters are on board and comfortable. Bike trains encourage safety in numbers and provide a festive morning commute. Bike Train Conductors are dedicated volunteers, experienced urban cyclists who recognize that biking to work can be daunting for an individual, but easy and enjoyable in a group.

Route 001 : Silver Lake to Hollywood
Led by Bruce Chan – Meets Wednesdays at 8:00am at Cafe Tropical.

Route 004 : Silver Lake to Downtown
Led by Alex Rixey – Meets Thursdays at 8:00am at Caffe Vita on Sunset and Hillhurst, near the Vista Theater.

LA Bike Trains is eager to expand! To provide input where you would like to join a bike train, fill out their Commuter Survey.

Biketown <— (that’s a real category at the LA Weekly?! sweet)

Ever wanted to ride a bike to work but were afraid to take on the mean streets of Los Angeles alone?Now you don’t have to. LA Bike Trains just launched and the folks there let us know that they have five routes where you can roll with a gang of cyclists, Midnight Ridazz-style, except not at midnight. There’s safety in numbers:

A rep for the group put it simply to the Weekly:

We organize group rides to help people commute by bike together along regular routes.

The organization states that it uses guides who know the streets and who can help get you to work safely:

We provide a rolling party along select routes run by Conductors – experienced urban cyclists – to harness the safety of riding in a group while kicking it up a notch by making the ride a fun social experience. And it’s totally free!

Although there are five routes in existence, the group wants to formulate several more. And that’s where you come in. The rep tells us:

We have a form for people to sign up for existing routes, suggest a new one and we’re gathering data via our commuter survey to help build out our network.

All the schedule info is here. You can sign up here. Once you’re in, organizers ask that you be on time. Or else you might miss the train.

Thanks for the love Dennis! It was a great way to kick off our first week. And equally awesome was that we immediately got a comments troll! See:

Derrickn: I kinda got excited when I came across this post because I take the train myself to work and love it. Then I read the post and it dawned on me that the headline is very misleading. It should read:

“Take The Bike Train to Work, LA: For White Women Who’re Afraid to Take Public Transportation or Ride Their Bike Through Non-White Neighborhoods.”

To which I responded:

We are actively working to bring LA Bike Trains to neighborhoods throughout LA and are very concerned in making the experience of riding with us fun for everyone, regardless of race, gender, income or philosophy. We love bikes, people and LA!

And then – benevolent internet fans stuck up for us! We’ve got an army!

A lot of people – not just women – are afraid of riding alone in rush-hour traffic, no matter whether it’s through Boyle Heights or Brentwood.

@Derrickn If you actually look at the routes and not the riders, you’ll see it’s both men and women riding through all kinds of neighborhoods to feel safe against traffic. Jerk.